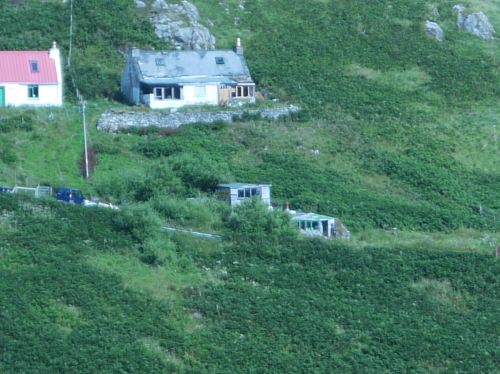 Or, how the first book in a series about the Outer Hebrides came by its name

“Should be mandatory reading for anyone considering a move to the Western Isles.”

One of the most interesting aspects of writing the book was trying to get a handle on the singular place that is the Isle of Lewis. Boggy, craggy, windswept, ring-fenced by the sea, it’s a kind of Hole in the Wall for misfits looking for a place that might fit, a bolt-hole for outsiders that takes no prisoners. What I wanted to do, in the midst of telling a yarn about the discovery of a bog body and getting down and dirty in the processes of tanning, was to cut through the sentimental aspects of a move to the Outer Hebrides – it sounds so like a romantic adventure, and in some respects it is, but like the princess looking for her dream prince, a lot of frogs must be kissed before you fall in love. Or, to keep in context, slosh through a lot of bogs before you reach the mountain.

The trickiest thing was coming up with the right title for a book about culture shock, alienation, bog bodies and marital collapse precipitated by a devastating combination of geography and leather. As it happened, the title was the last thing to take its place alongside all the other words – quite fitting, as the book is framed within a police investigation, and the title has, to me at least, the satisfaction of the final clue to the puzzle. Once it was there on the title page, it made sense of everything that followed.

The book tracks the painful line between an incomer’s expectations and the island’s reality; one of the major narrative themes charts the processes of arrival and survival of an English family – and what they find here, as opposed to what they think they’re going to find.

The quote at the head of this blog was given to me by the friend and expert who helped source and verify the research necessary for the bog body elements of the book. A few years before us, he had made the same journey, and recognised, as have subsequent readers, the darker sides of the incomer odyssey.

I also discovered Chris Stewart’s excellent memoir of moving to Southern Spain in the 1970s – Driving Over Lemons – and was particularly intrigued to see how many parallels there were in an incomer experience involving such different cultures and language barriers.

It isn’t all dark, of course – none of us would still be here if it was. And that’s another tricky part of trying to commit this place to paper – reconciling the moments of alienation and homesickness with the flashes of Wow! I really live in this fantastic place.

So Celtic Fringe is not a comfy relocation tale that describes an idyllic lifestyle founded on the principle of an extended holiday. Woven into the plot is something of what it feels like to move here and begin to make a place for yourself – and the slow realisation that many of the demons are not of the island’s making, but of yours.

The title surfaced during the last of several trawls through random word associations. It was buried in a Thesaurus; I’d never come across the phrase before and it was instantly right. Celtic Fringe describes the location perfectly – adrift between the shores of the Scottish Highlands and the waves of the Atlantic, and on the periphery of the Celtic domain, which strung itself along the western coastlines of England, Wales and Ireland, and as far south as Portugal.

But that isn’t why I chose it. It’s the definition of the phrase that strikes the chord. The book explores the psychology of landing in unknown territory and the experience of culture shock. I had been looking for words that described memories of my first year here; one of these was stranger, and ‘Celtic fringe’ was listed under the heading ‘foreigner’.

The move from mainland to remote island is different for everyone, but I liked the comment made by the man we bought our house from: "You have to be a bit mad to live here, but it's a wonderful kind of madness."