We had only been living in the Hebrides for a few years when we discovered a visitor hiding under the kitchen sink. Alerted by our daughter and the suddenly anxious behaviour of the two resident cats, Mike got a torch and shone it around, and the beam caught the glint of a big yellow eye. Someone didn’t want to be seen.

After a day or two, our visitor moved into a position - still under the unit - where we could see him. He was a big feral tomcat, a stocky, handsome animal with pale tabby-like markings on his thick fur. We don’t have wildcats in the Hebrides, but this one looked like he had some of the genes. He also had a terrible gash running down over his left eye, which was closed up while the other one glared at us. We called him Tigger.

This impressive animal had worked out he needed a safe hideout while he healed. He had picked a home that was cat-friendly and had a large, safe, dark area to hunker down.

Once we had made visual contact, we started to put food down, although we weren’t sure how a cat used to living wild would take to Whiskas. Turned out he didn’t care - he was very hungry; the first few days, he ate very cautiously and we could only see his head. Gradually, he got more confident and was more relaxed about accepting the food. We could see the gash over his eye begin to heal. 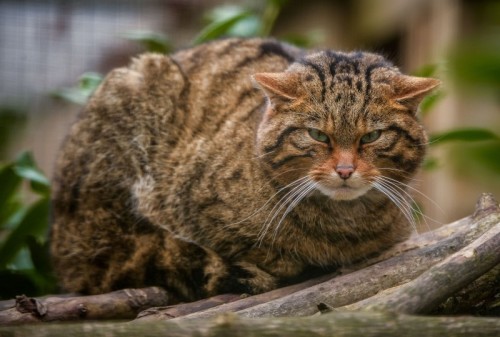 We got to the stage where we could risk chatting to him, and once or twice we even managed to scrat the top of his head. By this time, he had both eyes open and was looking a lot healthier. We began to hope he might stick around.

And then one morning, after about ten days, he was gone. He used our facilities, accepted the food, got strong and well and vanished back into the wild. In all the time he stayed with us, he never made a sound, just looked uncomfortable about having to ask for help, and grudgingly tolerant of our fascinated attention. Often missed - never forgotten.

The picture is the closest image I could find to how we remember him!