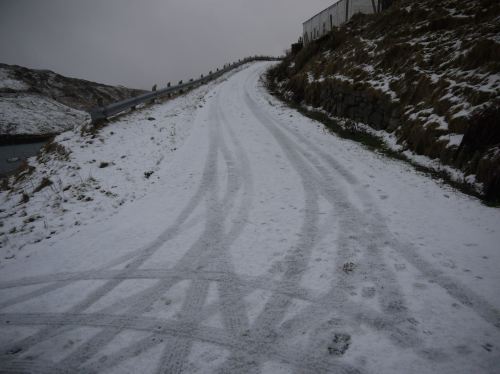 It was a mistake to try to get the car up the M1. The M1 is the local nickname for our single track access road which starts with a steep, upward hairpin bend to the left if you approach from the village, and an easier but still upward swing to the right if you approach on the downward slope from Loch nam na Foileag. We are talking a fairly steep ascent, with a steeper bump in the middle of its length which defeats many an attempt to reach the parking space 100 yards beyond it when conditions are icy.

On Thursday it was icy, but we fancied our chances, being veterans of the no-nonsense, confident second-gear uphill surge from the right, which can get the car all the way up if the ice is just a little bit forgiving. Not this time. Undone by the bump, we crept backwards and inserted the car into the roadside parking space for the holiday cottage a little further down. The surface was slippery, the handbrake was ineffectual, and Mike had to block all four wheels with rocks to get it to hold. 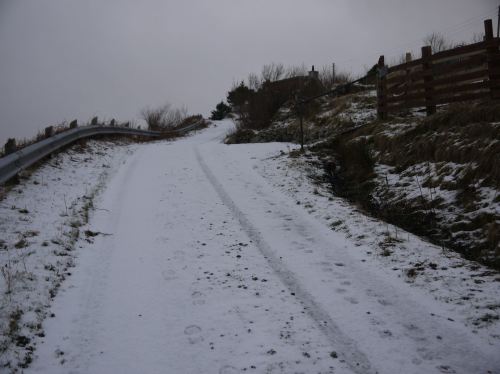 Friday morning, conditions were considerably worse. The road was an implacable slick of lacquered ice. While Mike inched his way down on a narrow strip of grass, I slithered to the driver side - opening the door and climbing in without ending up under the car was a major feat - and fired the engine. Mike got down on hands and knees to remove the rocks bracing the wheels.

I got the car onto the road, aiming to get traction on the grass on the other side. The car argued, sliding sideways into the crash barrier, back wheels on the grass, front wheels on the glossy, seamless ice. We weren’t going anywhere. Mike crossed the M1 on his hands and knees. Even the sheep were using the grass! 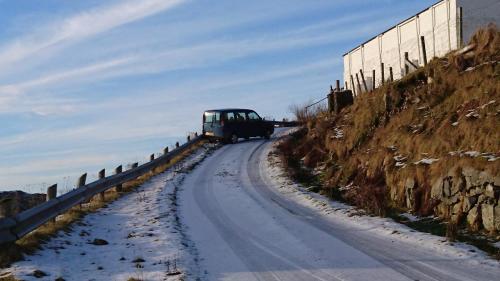 Thanks to Mark Stokes, who took this on the day! 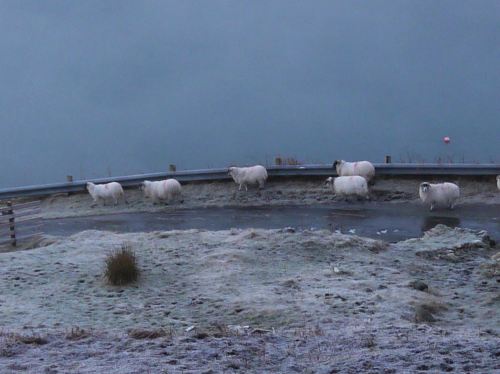 Saturday, we contemplated the still varnished surface of the M1 and Mike and Al set off with a sack of sand and grit to create a path that I could drive onto, before reversing the 40 yards or so down to the - gritted - lochside road. Mike put the sack down to pick up the spade, and watched it slide all the way down the road, only coming to rest when it hit the car. Al broke up the ice with a sledgehammer and we watched the shards sail away down the polished road surface, smooth enough for a curling match, fast enough for a bobsleigh run, and I wondered how the car would co-operate. 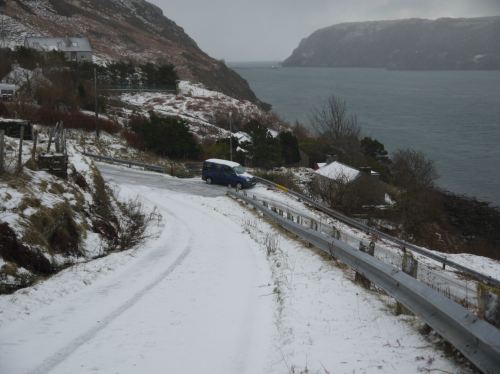 After a promising start, the wheels stopped going round, the brakes went on strike and the car began a relentless backwards descent, steadily gaining speed. Watching my destiny approach in the rear view window, I tried to anticipate the moment the wheels hit ice-free tarmac so I could brake and steer. I turned the wheel slightly and the car turned gracefully, like an ice dancer, gliding back towards the crash barrier and stopping, back wheels on grass, nose pointing across the road rather than up it. All I had to do now was turn the wheel to the right, and gravity would do the rest. 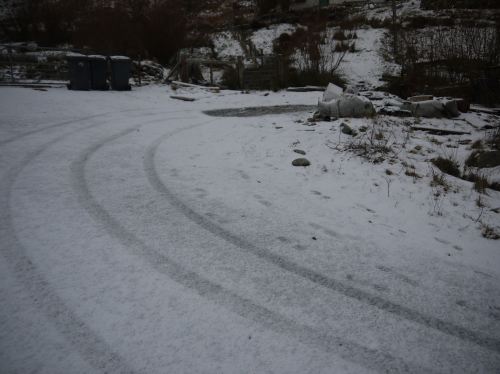 Long story short, the car slid towards the steepest, sharpest part of the hairpin bend, threatening a ripped exhaust pipe, but I managed to redirect the wheels and aim for the tarmac straight ahead. Crisis over.

You might be wondering why we didn’t just wait for the ice to melt; at the time, the car was full of hay, fencing posts, logs and coal. Not having to lug all this up from the bottom of the hill is a powerful enough incentive to make the attempt! 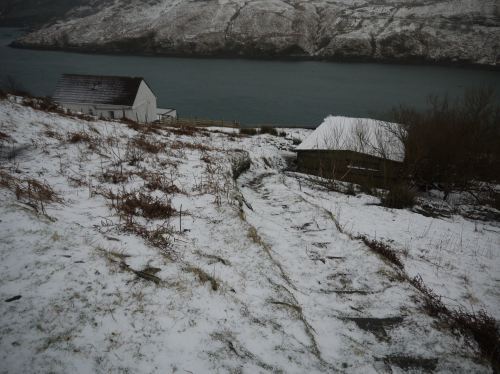