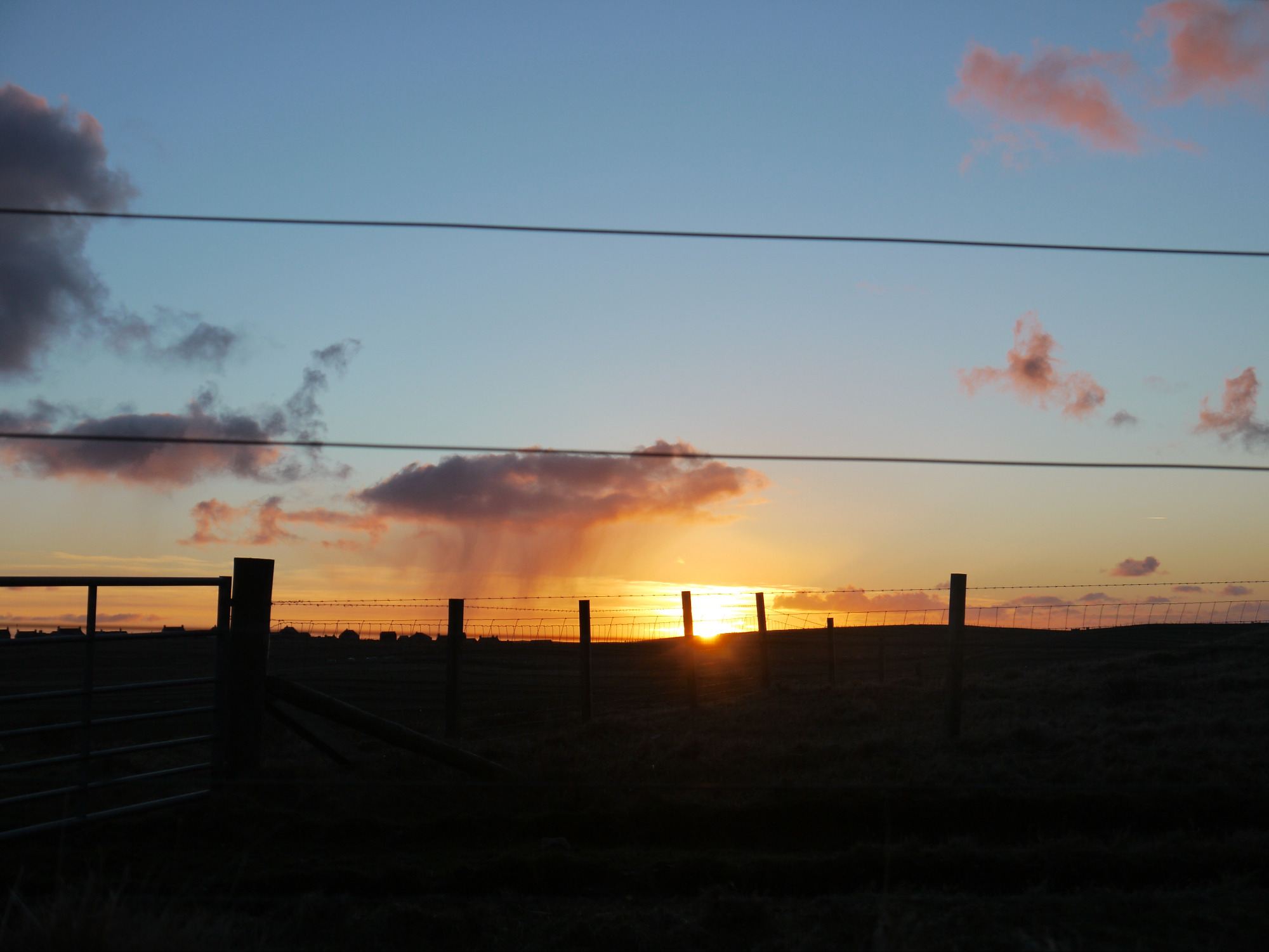 On a trip to dump rubbish before Christmas, I noticed a pile of car window glass on the ground in front of the community skip, and wondered how it got there. In  January, I found out. We were shifting some rubbish for the local shop, parked up at the skip and went to open the giant iron door; a sudden gust of wind took it out of Mike’s hand and it flew straight into the back of the car and took out the window … so that explained the pile of shattered glass I’d seen there before Christmas.

Later in the month, with the back window of the car boarded up and waiting the pleasure of Autoglass, we had a dinner invitation up at Ness. Because I had misunderstood the directions - which is code for I didn’t actually read them with proper care and attention - we couldn’t find the house, and I had to roll down the driver’s window to ask a passing van driver for help. All fine and good - except that having solved the mystery of where the house was, I couldn’t get the window to go back up.

Never mind - the mechanism had been temperamental for a while, so perhaps after a nice rest while we ate dinner, it would agree to co-operate for the return journey. Er … no. After a great evening and several attempts at closing the window, we resigned ourselves to a chilly 90-minute drive home. In the end it wasn’t as cold as we expected, although the snow flurries blowing into the car were a bit distracting. Following heavy rain and a gale the next night, I spent some time mopping up all the water that had collected in the dashboard cavity, and padding the seats, which were soaked through, with newspaper.

Come the end of February, the back window was replaced, the driver window restored to its closed position, the seats dry, and the car had passed its MOT. Brilliant. A week after being awarded the certificate, we were driving out of town when the car started to vibrate a bit and I saw a large black plastic ring ping off from somewhere underneath and roll across the road. We thought we’d better turn round and retrieve it, and get over to our garage before it closed. By the time we got there at quarter past five, the car was shaking and the steering had crashed. And the mechanics were out on an errand! They turned up just before half past and I explained what had happened and proudly produced the black plastic ring.

There was some head shaking. “The trouble is, the other half of that is still on the car,” our mechanic said.

“Isn’t that a good thing?” I said hopefully, and got the kind of look mechanics reserve for people who just don’t understand these things.

It turned out one of the drive belts had come off, so we had to run for the six o’ clock bus after arranging to ring the garage at nine the next morning. When I rang, the car was five minutes from being fixed - what great service! Cue mile-long power walk to catch the quarter to ten bus to go and retrieve the car.

And that was that. The car was all better again … except that now, it has developed a problem with the ignition key, which won’t turn to start the car. I discovered that the problem is worse when the key has been removed - when the car has to be locked, or fuel put in. It’s always worked eventually - until this Saturday evening, the end of the first craft market, when the car was packed up and we were ready to go home. After half an hour of wiggling the key and steering wheel, I was forced to admit defeat; Mike did the shopping and went to catch the six o clock bus - the dogs were at home - and I went to phone the AA from the pub. A helpful engineer told me that wiggling the steering wheel wouldn’t do anything - you have to play hardball to release the tension in the locking mechanism. I got into the car, pulled the wheel strongly in the direction of the key - and it worked first time.

After profusely thanking the AA engineer at the end of the phone, and the pub landlady for letting me use the phone, I drove to the bus station and got Mike off the just-departing bus. We stopped for fuel, which meant taking the key out of the ignition.  When it came to putting it back in, I confidently wrenched the steering wheel as before … and nothing happened.

Fortunately, another five minutes of wrenching, the handbrake off and Mike rocking the car, and something freed up and the key turned. Looks like I’ll be visiting my trusty mechanics again, come the end of Easter weekend - and maybe the cycle of car disasters will be complete ...