So there I was, ripping up old newspapers and using them to set the fire, when my glance fell on the page I was about to destroy … and I found myself looking at a picture of the Celtic Fringe book cover.

I don’t know when I sent out those press releases, but it was definitely last summer, there were about a dozen of them sent out to editors at papers across the Highlands, and after a pick-up by the Ullapool News and no other sightings, I had pretty much forgotten about them. Yet here it was, heading up the Bookshelf page in the Press & Journal for December 30th 2017.

With Celtic Fringe currently being reprinted, the editing process is underway for the second book in the Hebridean Series, Royal Macnab, due out this summer. More news soon! 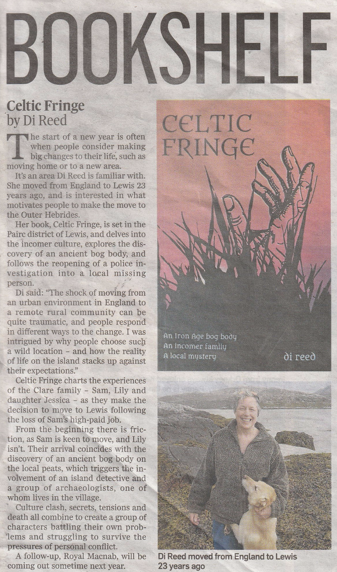