Q: How does a visit to the vet end up in an emergency trip to the garage? 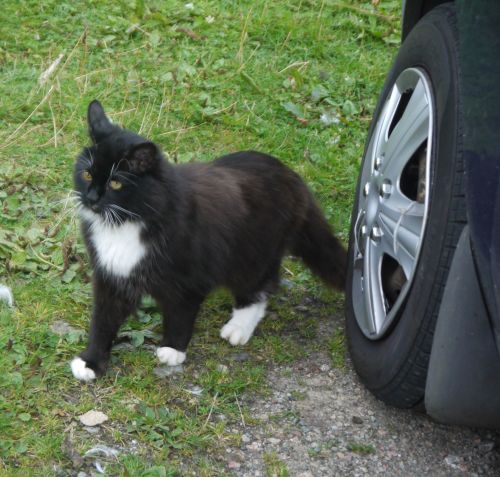 A: It happens like this: You take O’Malley to the vet for his annual jags. In his opinion, nothing is worse than being confined in a cat basket, including the medical procedures. In the course of leaving the vet’s, the catch on his basket comes loose and the door flies off. Mike swings the open basket upright to prevent an outdoor escape - the worst thing he can imagine -  and gets him inside the car. He finds the cat basket door and sees O’Malley curled up by the driver pedals in the footwell. He reattaches the door, looks back at O’Malley – and discovers he has vanished.

The black fluffy tail hanging down by the clutch pedal gives away his hiding place: he has got as far away from the cat basket as possible. You didn’t think there would be enough space for a cat to hide inside a dashboard? Neither did we.

All we can see is a patch of black fur and a few whiskers. Mike tries gently pulling his tail to work out his position. Resenting the intrusion on his person, O’Malley withdraws it and goes deeper. Throughout all this, he is remarkably serene. The dashboard is a dark, safe alternative to the cat basket.

Q: Is it possible to drive a vehicle with a cat inserted into the complex instrumentation of a dashboard?

A: Yes. While not recommended, it is perfectly possible to drive a vehicle with a large black fluffy cat wrapped around the steering column, surrounded by wiring and plugins and encased in strong plastic.

We start the engine to see if that encourages him to leave his hiding place. No. We reason that if anything about driving the car is upsetting for him, he will inform us. Our destination is the inventive, unflappable, never-say-die, keepers of the secrets of the automobile, our long-suffering garage owners D&J. They will know what to do.

We drive very slowly. The fastest route to D&J is closed because of road works. Of course it is. So we take the diversion, crossing many speedbumps. No protesting noises from the dashboard.

“You’ve never seen this one before,” Mike tells Donald on our arrival. Donald protests that they have seen quite a lot in the course of their careers, but on hearing our predicament, admits that a cat in the dashboard is a first for them. And they do like a challenge.

Q: Do D&J succeed in their mission?

A: Admirably. It takes about half an hour to find alun keys and torches, remove the lower right-hand panel, pull out a number of connections, and locate the exact position of the cat, who is level with the steering wheel. There's a moment when the four of us find ourselves gazing in at the two big yellow eyes staring out of the dashboard, and all of us are thinking, How in the world did you get to be in there? There are also some worrying moments, when we realise we might not actually be able to do this, and D&J are conferring about Plan B - taking off the top dashboard panel. Mike is thinking an outdoor escape might have been a lot easier. O’Malley has learned there are worse places to be than the cat basket, and is worrying about whether or not we can feed him in there if the situation becomes protracted.

Eventually, D&J extract him from his cramped quarters, exhibiting hidden cat wrangling skills and having worked out that he is not so much stuck, as has dug his back paw claws in for safety. In a delicate two-man operation, they prise him free and return him to the outside world, John sporting a nasty scratch delivered by the car, not the cat. Gratifyingly, someone strolls by at the critical moment O’Malley is being extracted head-first from the dashboard, so there is a witness to the extraordinary event.

Q: Was he traumatised by his adventure? 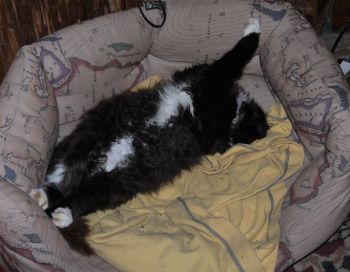 A: Not at all. Despite the indignity of his release, an hour later he wolfs down supper, trots round the garden, steals Jones’s dog bed for a nap, then curls up on daddy’s lap by the fire. The end of another ordinary day in the Outer Hebrides …